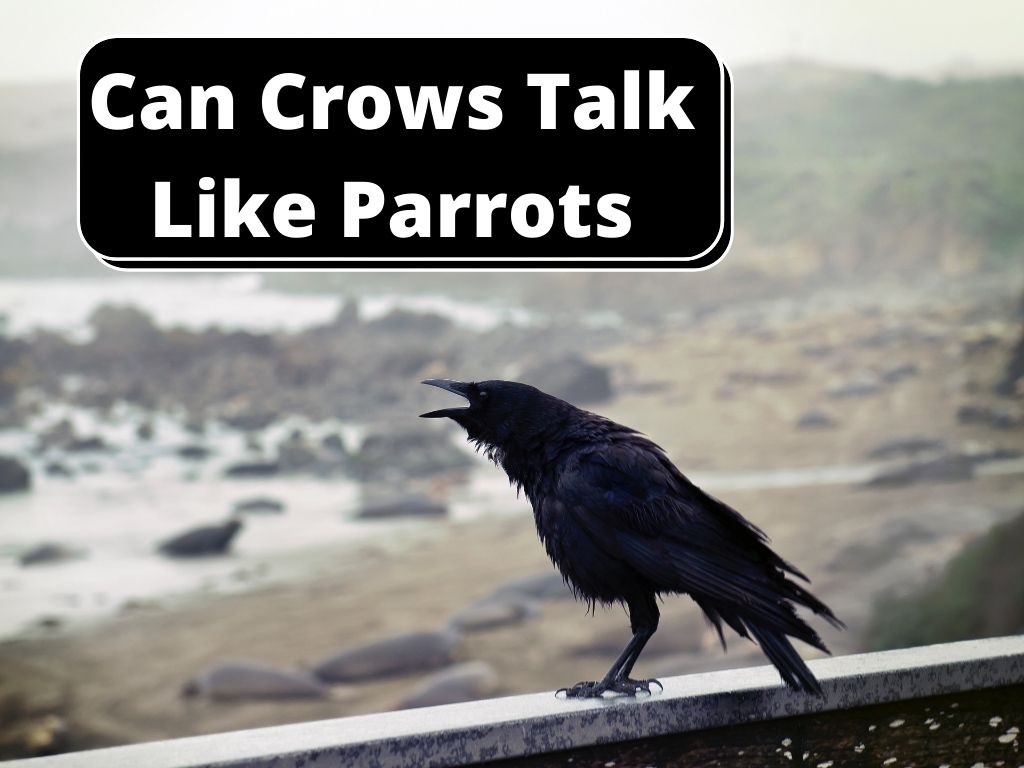 It is interesting to hear the voices of birds imitating human speech. There are several talking birds in the world. Notable among them are the Buzzeriger, the parrot, the parakeet, and the blue-fronted Amazon. Of all these, parrots can speak most perfectly and imitate human voices perfectly. Now, it may surprise you, can crows talk like a parrot?

Yes, crows can talk in the same way as parrots, they can use their syringes to mimic words and sounds and repeat words. Many may not be aware of this. Because just as people keep parrots as a hobby to listen to them, no one keeps crows. So many of us don’t know that crows can talk.

In this article, we will discuss whether a crow can really talk like a parrot and how you can teach a crow to talk. Let’s get started without delay…

You believe it or not, crows can really talk. Yes, it is true that crows can talk less than parrots. This is because they cannot use their tongues like parrots. Also since they are not close to humans like parrots, you will find significant differences in their vocabulary and fluency.

The parrots you have to make you feel more comfortable talking to people. Crows, on the other hand, do not talk to strangers. This is why when people think of talking birds, the first thing they think of is parrots. So, it must be admitted that crows are not as good speakers as parrots.

Technically speaking, the answer is no. Because really not all crows can talk like parrots. But it is true that in the case of parrots, all parrots can speak. Since they all carry the ability to speak with the same ability. Which is not possible by crows.

So, how well a crow can talk depends entirely on how many people it has been in contact with. So if the crows have been hurt or have not been around a human all their lives in any other way, you probably won’t hear them like parrots.

But if you can take them to you and raise them like parrots, hopefully, they will start talking soon. But for that, you always have to talk to the crow to teach him to talk. However, one thing confuses people and later they give up hope that a crow can’t talk like that.

Can The Crow Say Hello?

The answer is yes, the crow can say hello. Notice that when crows are around people in wildlife parks or zoos, they hear hello from people. They then immediately pick up the specific word in their voice and repeat it several times until they forget it.

However, the crows cannot explain to us what they are saying. Also, as we already know, birds have a vocal organ, commonly known as a voice box. Crows want to mimic human speech, much like parrots, using their syringes. You will see many videos like this on YouTube

How Do Crows Talk?

Crows don’t talk like humans. Crows try to talk like parrots. They hear and imitate words with the help of their syringes. They do not memorize what they have heard and try to remember exactly the same. Crows can mimic sounds with the help of several things. That is syrinx, intelligence, brain function. These are briefly discussed below.

Like parrots, crows mainly mimic sounds using their syrinx. Which is a unique vocal organ of the crow, it is also called the voice box. In this case, the crow’s tongue has no role in word-formation. Basically, crows imitate words just by listening without understanding anything.

Crows can talk and imitate faster than all the birds that live on earth. Although their heads are much smaller than those of other parts of their bodies, their intelligence is higher than that of other birds. They can easily recognize different patterns and tools.

Typically, a crow’s brain contains about 1.5 billion neurons (information messengers). In a crow’s brain, the nucleus of the song is made up of clusters of neurons. This is why crows can imitate words very well and even form whole sentences.

Can You Teach A Crow To Talk?

The answer is yes, you can teach a crow to talk if you want. But it has to be, especially when the crows are captive. Crows are so intelligent that when you say words in front of them they will pick up their voices. There is a common saying that if a crow’s tongue is cut off, a crow can talk. The truth is, you don’t need to cut the crow’s tongue to speak. It is absolutely a quote.

However, crows will not be able to pronounce your words directly. The way parrots can clearly imitate your words. Parrots can learn to repeat human names. But crows can count how many toys they have or answer your wishes.

How Do You Teach A Crow To Talk?

Teaching a crow to talk can only be easier if you nurture it in your home since childhood. If this is the case with a crow in your backyard every day, you want to train him to talk, but he will not be able to learn to talk. Here are five simple tips to help you learn how to talk to a crow easily.

Some small and simple words, such as hello, hi, peekaboo, good morning, night-night, goodbye, etc., can make a great start. The crow will try to imitate you as soon as you say the words over and over again. If this trend continues, crows will learn many words over time and can mimic words. Which will give you hope for the bird to talk.

Try not to forget to speak with enthusiasm whenever you talk to the crow. One of the advantages of speaking with enthusiasm is that when you repeat the words with all the enthusiasm, the crow picks up the vibration of excitement in his voice and learns very quickly. The more encouragement you give, the more interested the crow will be in learning the words.

He is most interested in doing the work for which there is a reward. So you will offer the bird a treat. Treating is one of the most effective ways to train a crow to mimic words. To make a crow interested in learning a word, you can reward him whenever the crow imitates a word correctly.

At a young age, the brain is very effective in remembering something. Studies have also shown that young crows are more capable of mimicking sound than adults. In this case, the young crow needs less effort than the adult crow. If you want to teach a crow to talk, you should try to teach a young crow.

If you want to do something with someone, you have to trust him first. In that case, one of the most important things to teach a crow to talk is to trust him. Try to spend a lot of time with the crow and let it form a good bond with you. If the crow doesn’t want to believe you, it will be hard for you to teach him anything. On the other hand, once you become faithful, that task will be very easy

In short, crows can mimic human sounds like parrots very well. Like parrots, since they are not always around people, they need to be taught a few words, such as good morning, hello, and more. This training can be difficult and time-consuming for crows as crows cannot learn and speak as fast as parrots.

Hope you know now that crows can talk like parrots. You also learn a lot about how crows speak where they hear words from and how they mimic words. Also if you have ever taught a crow to talk in any way other than this method, share your experience with us, whether it is difficult or easy.